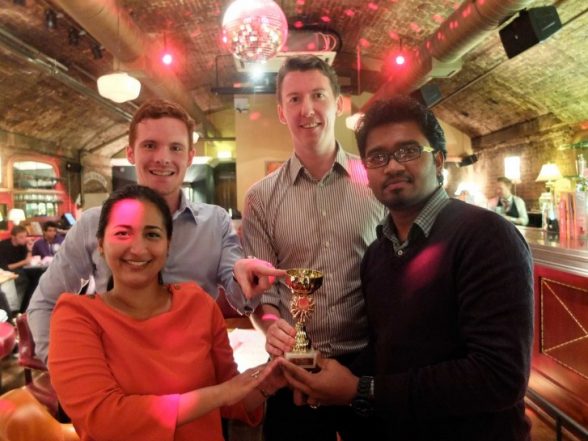 In September, 18 teams faced the unseasonal wind and rain to compete in SCT’s annual Treasure Hunt. Staff from the Bishopgate Institute, M&G, UBS, Wragge & Co and McCormacks Law, all put their observational powers and initiative firmly to the test in a bid to win the trophy.

Starting and ending at Revolution Bar in Tower Hill, the route took teams around Tower Hill and into the City with the clues.

The winners were the Indiana Clones team from UBS, a team that had won the Hunt 4 years ago. Naina June Ghosh from the winning team said:

“Thank you for organising a great event. As part of the winning team, we want to be back next year to maintain the trophy!”
Naina June Ghosh

Thanks to all the following local businesses that so kindly donated fantastic prizes for our raffle:

Find out more about what we do