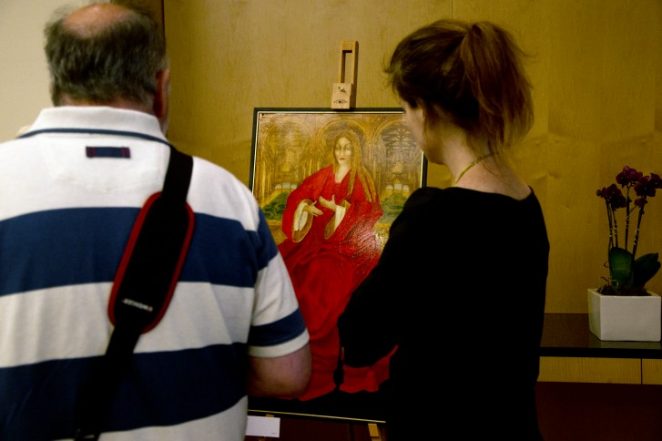 In June, art students from our New Hanbury Project displayed and sold their works to the public. For many it was the first time they had ever exhibited something they had created.

“I’ve been an art student at the Hanbury now for four years, and when I started my pictures were dreadful”, said David O’Keefe. “I’ve definitely learnt a lot along the way. I’d like to see my pictures end up with someone who really appreciates them.”

More than half the works were snapped up by buyers attending the event, which was kindly hosted by our partner, Shearman and Sterling.

On his painting ‘Magdalene’ which took 2 months to complete, David said “I chose The Magdalene as my subject because she’s a reformed character – and for me that’s what the Hanbury is all about. “It’s done in about 40 glazes like the Old Masters used. I used to think that a glaze was a complete cover, but it’s not. It’s just different patches that you work on the palette. It’s all done on white board, which gives it the shimmer.”

“I chose The Magdalene as my subject because she’s a reformed character – and for me that’s what the Hanbury is all about.”

“The hands are very expressive – that was the mark of that period of art, they had very expressive hands. She’s dressed simply – no jewellery – but all in red. I chose it to symbolise the journey of the reformed character. And also because it had the most impact.

Katrine, our art teacher said “I’m really happy with how it went. So many students came along and brought their friends and family. One student wanted to go home from the moment he got there, but we convinced him to stay for one hour. In the 59th minute he sold his painting. It was a lovely moment.”

“One student wanted to go home from the moment he got there, but we convinced him to stay for one hour. In the 59th minute he sold his painting. It was a lovely moment.”

With every sale split 50/50 between the artist and the charity, it’s the pride that the students get from someone liking their work that’s the bigger achievement for most of our students, rather than the money.

David had 3 other paintings on display in the exhibition.

“I had a go at art as a boy, but it wasn’t until recently that I’ve taken it seriously. And now I’d like to do it all the time. “It’s very easygoing. You can explore any ideas you have – but there’s always guidance at the New Hanbury.”

“We exchange ideas and there’s an easy camaraderie, but we do our own thing. I’d like to try Impressionism next.”

Best of luck David and we look forward to seeing more of your great work.

Watch this space for news about next year’s exhibition.