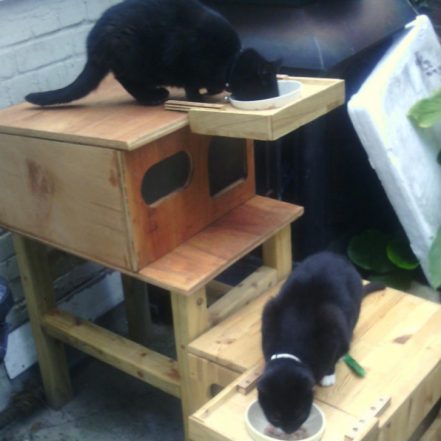 Alcohol Awareness Week begins on Monday November 17th. SCT helps people experiencing the most serious impacts of alcoholism – an addiction that nearly cost Martin his life. His story is a moving example of how – through abstinence, and given the right support – people can take control of their lives and rebuild their most valuable relationships.

“My mum has found that doing woodwork has calmed me down a lot. I am seriously enjoying woodwork and I blame that on Bernard!

It has focused me a little bit more. Some of the projects I’ve been working on are insane because of my mad way of thinking, it’s out of the box but Bernard manages to get what I’m thinking then gives me some structure on how to get to where I’m going. Somehow they manage to come together.”

Martin hasn’t done any kind of work with wood before, yet he’s recently finished making the deluxe 2-storey cat house shown above, with eating trays and windows “the whole works”. Martin also made a wooden tray for his mum so that she can eat in bed. Beautifully designed and finished, she’s a very happy lady. In more ways than one.

Having only later on in life discovered that he was dyslexic, Martin is also having one-to-one literacy classes with Margaret, our fantastic literacy and creative writing tutor.

“I’m now learning little tricks from Margaret of breaking words down. This is my second term here and I’ve calmed down a lot. I didn’t used to have control over my emotions but the New Hanbury Project has helped me and gives me a good positive structure.”

“It’s taken away that dead time, that boredom that’s the killer to an addict because you start to get anxious. You start to think about what you were addicted to all the time so being here and keeping busy actually helps cut down the urges and frustrations.”

It was around a year ago that Martin sought help. It followed an attempted suicide.

“I’ve never thought of hurting myself. It was always something that my doctor asked me but it never entered my mind to actually hurt myself. But one day I felt ‘what’s the point? Everything in my life is going wrong but I’m trying so hard’, something went into my mind and I decided to just call it a day.”

The day after I tried to commit suicide I realised how selfish that move was because my girlfriend was crying and I was thinking of my mum coming back from on holiday and finding out I was dead. All I cared about I was me, not what I was leaving behind so I made a point of giving up drinking there and then and focus on that.”

Martin told us that he’s stopped rushing into doing things and is thinking more about his actions. My favourite line here, and you can ask Bernard, is that ‘If a job is worth doing, it’s worth doing twice. I don’t rush into decisions now like I used to. Before if I had an idea about a job, I would go ahead and bang the job out and then see all of the failures.

Now I am able to make less mistakes. And I’m much more diplomatic. I think about stuff, I’m taking control”.

Martin knows that recovery can be life-long and that help is always needed. “I’ve gone to rehab before and gave up for 4 years, went back to drinking, gave up drinking et cetera. I’ve noticed that boredom is the killer for me. If I’m bored I’ll go back to drinking. As a drinker you think that you get better but that’s not necessarily the case.”

So we asked Martin what he’s going to work on next: ‘Next? The cat’s jacuzzi’s coming next!” he says laughing.

SCT has been helping people like Martin since 1965. We understand addiction, and we understand that relapse can be part of a person’s recovery. Please donate now so that we can provide structured routine to more people in recovery. We’re here for the long-term.

Help us raise an extra £50,000 in our golden year to help more people like Martin