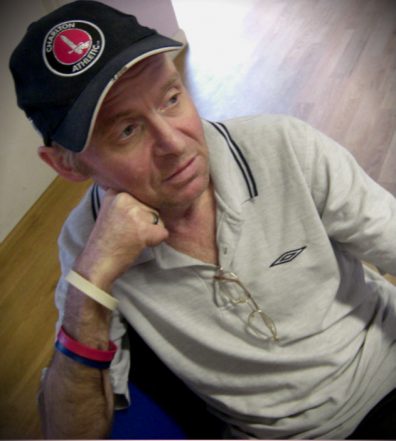 While we are busy super-charging our homeless drop in for the health and well-being MOT on Thursday February 5, we wanted to share a story that reveals something of what rough sleeping is like.
Fun, cheeky, street-wise Alfie has lived on London streets for decades, seeing the demise of government hostels (the Spike), feeling the effects of drinking on his fading health and witnessing too much of the dark side of life.

“Despite facing these challenges Alfie continues to hold friendship and love in high regard, remains appreciative and cheerful and even shows the strength of character to keep supporting Charlton Athletic.”

The bright lights of the West End hit me. I began to spend a lot of time there. In those days it was mainly drinking sherry and beer. Met lots of interesting people from all walks of life. Very close community in those days. I saw a lot of death on the street, good people who did not deserve to die.
Hated religion. Hated rules. Hated sobriety. Went for loads of detoxes and rehabs, too many to mention, some good, some bad.
Went to a good place called Caplin House. I stayed for one year and dry. Then one day, it was a hot sunny day, I thought I would love a beer. Just one. Went to the Off Licence and got a can of Tenants. Sat on some steps for ages, just looking at the can.
Then I opened the can. One can will not do any harm. Little did I know.
Just get four cans and that’s it. Drank the four cans and then thought,
“F**k it. Just for tonight, go out and get out of my head.”
I had hit the streets as a bright eyed nineteen year old boy. It seems a long time ago.
Sleeping on the streets – The Embankment, The Strand, the back of the Savoy Bullring. I can always say I stayed at the Savoy. Met so many people, doctors, solicitors, ex-forces  – all had a story to tell.
Spent my days begging, needed to supplement my drinking. I called it, “My job.” It was hard work, especially in the winter, surviving using the Day Centres to eat and keep clean.
Shoplifting was a way of life. The police were good to me, always looking out for me.
Death was a way of life. One time sleeping next to a Scottish guy, I got up in the morning and he had died. What a waste of a life?
Sunday was my day off, made my money on a Saturday night. Always went to Covent Garden on a Sunday to watch the street entertainers. Met so many good people who gave me money and food. I could have opened a sandwich bar with the amount of food that people gave me.
The Bullring in Waterloo was like a little village. People built their own little homes from cardboard, wood, plastic, some very good. Big fires.
Some years ago, there were government hostels, we called them Spikes, dorm accommodation. Get a shower, get my head down for a day or so. The camaraderie was good, we all looked out for each other. Things began to change. The Council wanted to clear up the streets, get us off, move us out of the area. We would always come back within a week. So, they gave up.
As I got older, my health began to suffer, in and out of hospitals, always discharged myself. Hospital was a lot of seeing my health deteriorating. Never think of myself as getting older. The years got harder. The drinking got worse.
I had a few partners in my time. Met Kim, very strong woman, been through a lot herself. But I know I can trust and love her although sometimes I still don’t show it.
People often ask me do I have any regrets. No regrets. Would I change things? Maybe. But my journey has made me the person I am today. I will soon be moving on, my journey is still not complete.
Last but not least, I would like to thank all the people that have helped me in my life.
I will sign off for now. Be safe and happy. Thanks,
Alfie.
Alfie shared his story with Rod Boucher at SCT’s personal development and training centre, New Hanbury Project.
With thanks to James Hosking for giving his time to edit Alfie’s story.