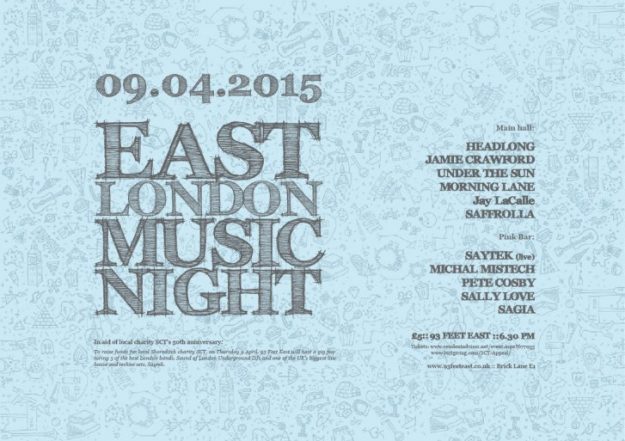 It includes: alternative rock band, Headlong; pop blues trio Jamie Crawford; the eclectic Under The Sun and thoughtful Morning Lane. Read more about the bands below who are all generously playing for free to support us!

The East London Music Night is being organised by volunteers Martina Danielova and SOLU.

“I work in Shoreditch and walk past homeless people all the time. I was inspired by SCT’s work. Their work doesn’t offer a fashionable mind fix but genuine changes that really get into the soul. I had no idea it was their 50th birthday this year so it’s an extra special event and the first of its kind for SCT. The bands and DJs have just been fantastically supportive and we’re all working hard to make it a great night out.”

“DJ Mag” Saytek Live will also be playing tunes on the night. We’re especially pleased that Saytek is supporting us as he is a great role model for those suffering long-term recovery from addictions.

Having been on drugs since early childhood due to a failed diagnosis of autism, Saytek today is happy, healthy and proof that people can turn around their life around. With the right support, people in recovery can become happy parents, successful musicians and help others to make that same change.

Buy your tickets safely and easily at: www.justgiving.com/SCT-Appeal

Formed by two school friends in Bexley, south east London in late 2012, Headlong have come a long way in 2 short years. From writing and recording their own original demo’s to playing the local pub circuit, along the way they have amassed 10,000 views on their Youtube page and have attracted the attention of top London & south coast promoters.

Taking inspiration from The Foo Fighters, Nirvana, Radiohead and The Verve, Headlong have made their own niche in the Indie/Alt-Rock scene. They are currently recording their debut album and are getting noticed by promoters, having a few high profile gigs under their belt with more to come.

Jamie Crawford are a Pop Blues trio that came together at the beginning of 2014. They released their first EP, Wish Me Luck, in July which is available on iTunes and Spotify.

Emerging from the melting pot of London’s music scene, Under The Sun is an eclectic 5-piece rock band, bringing audiences piano-driven yet guitar-heavy songs that are both fun and poignant.

Under the Sun’s elegantly-arranged musical compositions, punctuated by vocal harmonies, counter melodies and screaming guitar solos, have gained them a dedicated following in the short time they have been together.

With influences ranging from Incubus, Kings of Leon and Coldplay, Morning Lane have consolidated their position as one of the best bands on the London scene.