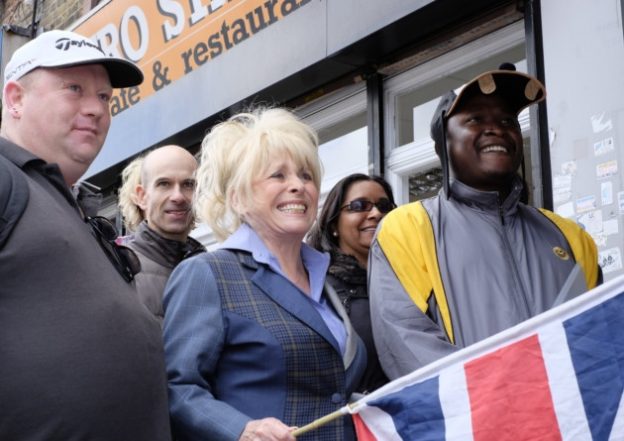 “It’s great to be back in Bethnal Green, near where I come from!” said Barbara Windsor MBE just before she waved the flag to start our unique Charity Shop Strut sponsored walk.

“Good luck to Colin and Matti, I think it’s wonderful what they’re doing, especially for a small charity like this” said the Carry On and EastEnders star.

“Good luck to Colin and Matti, I think it’s wonderful what they’re doing, especially for a small charity like this

Over 60 locals crammed into our Bethnal Green Road charity shop and spilled out on to the street to cheer the walkers on.

Scroll down to see photos from the Charity Shop Strut

The walkers passed the hipster hangouts of Bethnal Green,  pressed on through Roman Road’s bustling market and took in views of the Olympic Park from paths along the peaceful River Lea.

By the time they arrived at our social enterprise coffee/bookshop Paper & Cup in Poplar, they were ready for a large coffee and the plentiful cakes supplied by Debaere and  Tossed.

Big thanks to Fentimans Ltd for their delicious drinks and the fantastic Dan and Jo from the Bicycle Bar for carrying them all!

“It was just fantastic; I was knackered after the event though! I wanted to work in the garden but I couldn’t walk for a day after. I would love to do it again though!” said Matti. Colin, who came up with the idea of the Strut said: “It was great fun!”

“I would love to do it again though!” said Matti. Colin, who came up with the idea of the Strut said: “It was great fun!”

We are so proud that two of our former Acorn House residents wanted to do this walk for SCT to help us help more people like them. Just last month, they moved into one of our supported houses and onto more independent lives.

The event has raised over £600 so far but donations are still coming in. 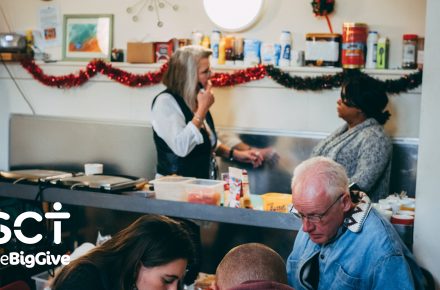 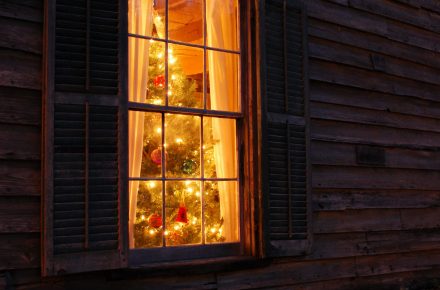