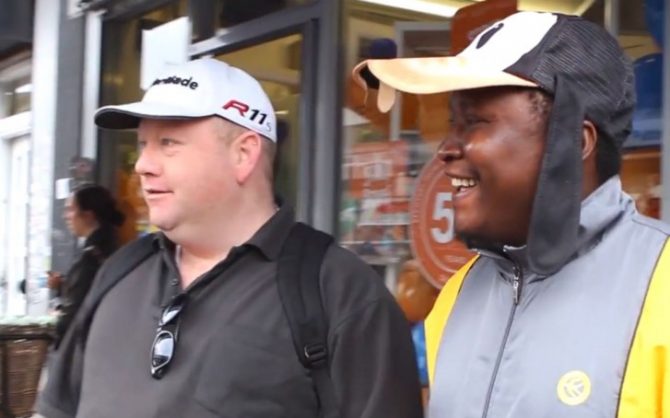 There’s a brilliant new film on our Youtube channel today. ‘The Strut’ follows Matti and Colin on a sponsored walking tour of East London – their initiative to raise funds and awareness during SCT’s 50th Anniversary year.

Both speak frankly about the experiences that led them to rehab in Acorn House. The event was their way of giving back to the charity, and helping support others in recovery from addictions and homelessness.

We were honored that Barbara Windsor gave the walkers a send off from a crowded SCT charity shop on Bethnal Green road:

“It’s great to be back in Bethnal Green it’s where I come from. Good luck to Colin and Matti, I think it’s wonderful what they’re doing, especially for a small charity like this.”

Said the Carry On and EastEnders star.

The walkers passed the hipster hangouts of Bethnal Green, pressed on through Roman Road’s bustling market and took in views of the Olympic Park from paths along the peaceful River Lea.

By the time they arrived at our social enterprise coffee bookshop Paper & Cup in Poplar, they were ready for a large coffee and the plentiful cakes supplied by Debaere and Tossed.

“It was just fantastic; I was knackered after the event though! I wanted to work in the garden but I couldn’t walk for a day after. I would love to do it again though!” said Matti. Colin, who came up with the idea of the Strut said: “It was great fun!”

“It was just fantastic; I was knackered after the event though! I wanted to work in the garden but I couldn’t walk for a day after. I would love to do it again though!” Matti.

Big thanks to Fentimans Ltd for their delicious drinks and the fantastic Dan and Jo from the Bicycle Bar for carrying them all!

And our appreciation to Louis, Dean and the team at Gorilla-Gorilla for producing such a wonderful film of the event.

SCT receives no direct government funding. Income from donations at charity shops funds much of our work.