Memories from the Crypt 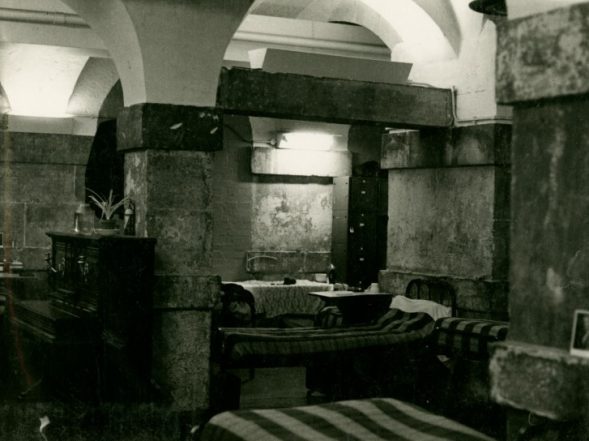 My association with Christ Church Spitalfields began when I was training with Church Army and used to spend one day a week in the parish with permission of Revd Denis Downham.

Just after the Crypt was opened, I was invited by the Rector to join Captain Ronnie Rourke and his wife Janet in the work of the Crypt as Deputy Warden.
I was immediately impressed by the vision for the work of the Crypt and by the inspiration of Ronnie Rourke who could see the real person beneath the ravages of addiction and homelessness and the person that could be through the transforming love of Jesus.

It was a privilege to work with Denis, Ronnie and Janet, and Doctor Coleman who took on the medical care of the residents. We prayed and sought the way ahead, often learning the hard way that the Crypt had to be a place of acceptance and refuge and a dry house if people were to find new direction and change.
I remember the long walk through the corridor to answer the door never knowing who would be there and what the need would be.
I remember Dominic  who appeared  with a plastic bag burnt on his face from where he had been sleeping round the fire. And Donegal Jock whose clothes had to be carefully cut away.

“I remember Dominic  who appeared  with a plastic bag burnt on his face from where he had been sleeping round the fire. And Donegal Jock whose clothes had to be carefully cut away.”

On admission, we discovered that the easy way to deal with lice was to ask the men to undress on newspaper which was then burnt.

Night duty meant sleeping in the staff room and often being alongside when residents were going through withdrawal. The medication rounds were important and we were well trained by Dr Coleman who was always available and whose great sense of humour and understanding encouraged us all.

The work could not have advanced without the many volunteers who came to sort out the clothing store and the medical students who came from the London Hospitals to help. Not forgetting the ladies who came to bake cakes and keep us well stocked. I quickly had to learn how to cook a roast Sunday lunch for twenty people when we did not have a cook and I still make Yorkshire puddings today with the same recipe that Janet taught me!

I remember opening the door one evening to a gentleman from the city dressed in his immaculate suit, complete with umbrella and brief case, who asked if he could help in any way. I did not think he would have much to offer, but how appearances can be wrong.  Jack went on to be a main stay of the work and Trust for many years.

“Many an evening was spent sitting on the bed of someone who needed to share his story, journey and struggle, tales of unbelievable pain.”

I remember the elderly gentleman who came on a long journey every week to sort out clothing and help the men with new outfits and the vicar and his wife who came from Kent every week to spend a whole day just befriending the men and sharing with them. The real counselling and sharing often took place over the snooker table as people became relaxed and open to talk.

Many an evening was spent sitting on the bed of someone who needed to share his story, journey and struggle, tales of unbelievable pain.

I still recall the story of the Chief Engineer, the Bio Chemist, the Roman Catholic Priest, the teacher, the ex- Japanese prisoner of war. Addiction is no respecter of persons.

“I still recall the story of the Chief Engineer, the Bio Chemist, the Roman Catholic Priest, the teacher, the ex- Japanese prisoner of war. Addiction is no respecter of persons.”

There were scary moments when faced at the door with aggression and anger and I was thankful for my previous training in Judo which enabled me to defend myself without causing harm to anyone else. JJ (who was feared by others because of his brawn and temper), burst through the door into the crypt one night and a tussle followed during which I was able to subdue him safely with a Judo hold. My cred quickly rose with the other men and doors were opened to talk and share.

Occasional visits to the waste sites where some slept around a fire helped to create a trust for the time when some would reach the point of seeking help to overcome their addiction. However, it was not all about giving, because we received from those we shared with through their friendship, courage, experience of life and often sense of humour as they began their new journey.

It was during my time at the Crypt that my future father-in-law, a farmer in Kent, became a Christian. I was able to take a few of the men to visit the farm for the day and Ray and Violet Sinden would put on a meal for them. He eventually felt the Lord calling him to take two or three men to live and work on the farm and then eventually heard the Lord’s call to sell his farm and home and begin the work of Kenward Trust, (now 45 years old), purchasing a large disused Barnados home where men could find a home, new life, rehabilitation and new skills.

It was a joy when Olive and I were married to see residents from the Crypt coming along to share in our day. We thank the Lord for those who eventually came from the Crypt to live at Kenward and some – who never relapsed – and lived out the rest of their lives there having discovered a new beginning and peace of mind.

God’s love and purposes are wonderfully worked out in a way we can never realise through those who first saw the vision of SCT and stepped out in obedience.

Two scripture verses were an inspiration for Ray and Violet Sinden and I believe are at the heart of what SCT was all about and still is: “I know the plans I have for you,” declares the Lord, “plans to give you hope and a future. Then you will call upon me and come and pray to me and I will listen to you.” (Jeremiah 29 verse 11). “I will restore to you the years that the locusts have eaten.” (Joel 2 verse 25).